what will you find?

Communion Cup
The Lord’s Supper is a soul-stirring experience because of the depth of meaning it contains. It was during the age-old celebration of the Passover on the eve of His death that Jesus instituted a significant new fellowship meal that we observe to this day. It is an integral part of Christian worship. It causes us to remember our Lord’s death and resurrection and to look for His glorious return in the future.
The Passover was the most sacred feast of the Jewish religious year. It commemorated the final plague on Egypt when the firstborn of the Egyptians died and the Israelites were spared because of the blood of a lamb that was sprinkled on their doorposts. The lamb was then roasted and eaten with unleavened bread. God’s command was that throughout the generations to come the feast would be celebrated.
During the Last Supper—a Passover celebration—Jesus took a loaf of bread (plate) and gave thanks to God. As He broke it and gave it to His disciples, He said, “This is my body given for you; do this in remembrance of me.’ In the same way, after the supper he took the cup, saying, ‘This cup is the new covenant in my blood, which is poured out for you.’”  He concluded the feast by singing a hymn and they went out into the night to the Mount of Olives. It was there that Jesus was betrayed, as predicted, by Judas. The following day He was crucified.

Baptismal Font
In the Christian Church the religious rite of sprinkling water onto a person's forehead or of immersion in water, symbolizing purification or regeneration and admission to the Christian Church. A baptismal font is an article of church furniture used for baptism. The fonts of many Christian denominations are intended for baptisms using a non-immersion method, such as aspersion or affusion. The simplest of these fonts has a pedestal (about 1.5 metres tall) with a holder for a basin of water. The materials vary greatly consisting of carved and sculpted marble, wood, or metal.

Hymnal
People of all faith traditions have used singing as part of their worship. The Christian faith in particular, has historically been linked with songs of praise, or hymns, to their God. These hymns are historically compiled into a hymnal.
A hymnal is, obviously, a collection of hymns, but many also have acts of worship and ritual within their covers. A hymnal may be published by a particular Christian denomination, but there are also “generic” hymnals that include the most popular hymns from over the years.

​Organ
The organ has been around for a long time and probably began making its way into the Western church setting around 900. The liturgical and musical tradition of the Eastern church is quite different. Certainly by the time of the Reformation the organ was well established in monastic churches and cathedrals of Europe. The organ was considered to be an instrument that could lift the soul heavenward, fill the space of large cathedrals with beautiful sound as well as accompany congregational singing. Hence you have composers like Johann Sebastian Bach and Dieterich Buxtehude who wrote pieces specifically for the church setting. The organ was also a “stand alone” instrument that required only one musician as opposed to a small ensemble or orchestra. Thus the organ became well ensconced as the traditional instrument for church music by the 1400s. It is only in the 20th century that other instruments or forms of accompaniment, such as praise bands, began to appear in the church.
The organ in the back balcony was hand-made by the Martin Ott company in St. Louis in 1991. It was first placed in a monastery in Harlan, KY prior to its relocation to Lingle Chapel in 1996. It has one keyboard plus pedals, and is mechanical action. This means the keys have a direct connection to the openings of the pipes. There are seven different sounds, or stops, available.

Bible
The English word "Bible" comes from bíblia in Latin and bíblos in Greek. The term means book, or books, and may have originated from the ancient Egyptian port of Byblos (in modern-day Lebanon), where papyrus used for making books and scrolls was exported to Greece.
Other terms for the Bible are the Holy Scriptures, Holy Writ, Scripture, or the Scriptures, which mean sacred writings.
The Bible is a compilation of 66 books and letters written by more than 40 authors during a period of approximately 1,500 years. Its original text was communicated in just three languages. The Old Testament was written for the most part in Hebrew, with a small percentage in Aramaic. The New Testament was written in Koine Greek.  Christian faith is based on the Bible, and it is viewed as the inspired Word of God. It unfolds as a divine love story between the Creator God and the object of his love--man. In the pages of the Bible we learn of God's interaction with mankind, his purposes and plans, from the beginning of time and throughout history. 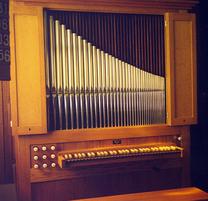 Christian Cross
The Christian Cross, seen as a representation of the instrument of the crucifixion of Jesus, is the best-known symbol of Christianity. It is related to the crucifix (a cross that includes a usually three-dimensional representation of Jesus' body) and to the more general family of cross symbols.
However, the cross has numerous other religious meanings as well, most of which have to do with being groups of four, corresponding to the four points on the cross.
​    Crosses very commonly represent the earth and the physical universe, particularly in Western culture.
This comes primarily from two associations: the four physical elements (earth, water, air and fire) and the four cardinal directions (north, south, east and west). Indeed, the astrological symbol for Earth is a cross inside a circle. The same symbol is also known as a sun cross or solar wheel and has been associated with the sun and its four seasons.